Three generations: Jim, Frank and Arthur Perdue in the 1950s.

Our company has remained family-owned and operating since 1920. Two generations currently work in the company and the family is committed to keeping Perdue Farms a family-owned business. 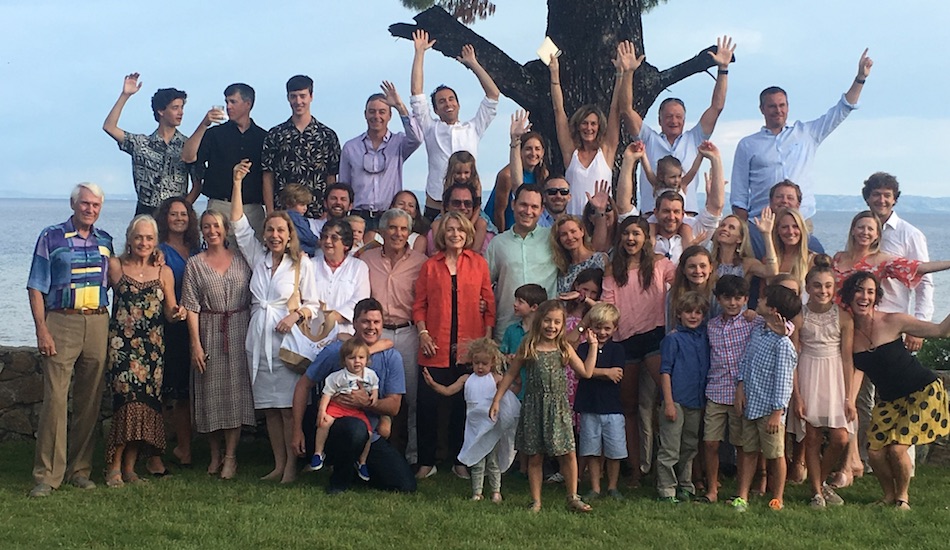 Multiple generations of the Perdue family. 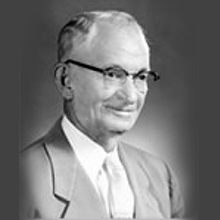 In 1920, Arthur W. Perdue completed his plan for going into business for himself. He gave up a promising career as a railroad agent on the rural Eastern Shore of Maryland to manage his backyard table-egg business.

Mr. Arthur, as everyone called him, was known for his concern for people, his frugality, his love of reading and poetry, and a dedication to his faith and hard work. His values of quality, integrity, trust and teamwork still make an impact on our company today. Mr. Arthur was active in the business up until his death in 1977 at age 91. 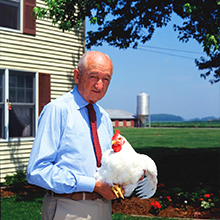 Frank Perdue began helping his father as soon as he was big enough to hold a chick in two hands.
In 1939, at the age of 19, Frank Perdue left college to join the family business as its third full-time employee. Frank took over leadership of the business in 1950, nurturing the company through a period of phenomenal growth. He invested in the grain facilities, feed mills, soybean refinery and processing plants that allowed the company to expand into fresh poultry. Through his now-famous advertising campaign, which stressed his stubborn commitment to quality, he made the PERDUE® brand a household name. 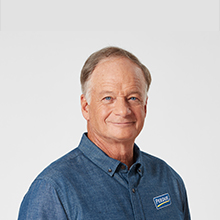 After working many different management jobs in just about every area of the company and earning his master’s degree in business administration along the way, Jim became chairman in 1991 and took over as advertising spokesperson in 1995.

Jim is guiding the company in its second century of ownership by holding fast to the values he inherited from his grandfather and father and responding to consumers and other stakeholders.

As a result, Perdue Farms has become the first major company to move away from all routine antibiotic use, the number one producer of USDA certified chicken and a leader in improving animal care. 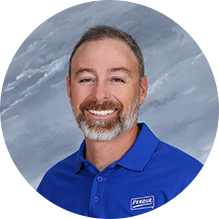 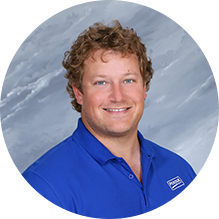 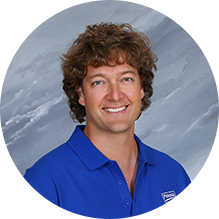 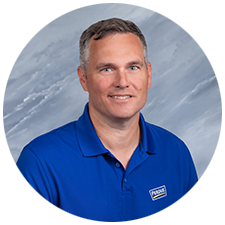 
In addition to Chairman Jim Perdue, four members of the next generation of Perdues are currently working in the family.

Chris Oliviero is a vice president and general manager for one of Perdue Foods’ premium brands Niman Ranch. He joined Perdue in 2007, and spent time in plant management positions before moving into sales serving as Vice President of supermarket deli and retail business management. He holds a bachelor of arts degree from Middlebury College and earned his master’s degree in business administration from the Darden School of Business at the University of Virginia.

Chris Perdue is Vice President of E-Commerce for Perdue Foods. He joined the company in 2013 in the Operations Management Trainee Program as a shift leader at the Salisbury, Md., harvest plant before moving to Perdue AgriBusiness as a director. He was named Director of E-commerce in 2019. He holds a bachelor of science degree in biology from Wake Forest University and attended the Institute of Advanced Advertising Studies program.

Ryan Perdue is Vice President and General Manager for all of Perdue Farms’ Pet Treat and Pasture Chicken business. He founded the pet division of Perdue, and leads the strategic development of our efforts to raise an increasing number of chickens on pasture. He joined the company in 2010 as a strategy consultant and was later named director of business development. He earned his bachelor of science degree in biochemistry from Dartmouth College.

Rick Lloyd is Director of Business Development for Perdue AgriBusiness. He joined Perdue in April 2020 after years of building and growing high-performing sales teams with a number of Fortune 500 companies. Rick holds a bachelor of science degree from Bridgewater College. 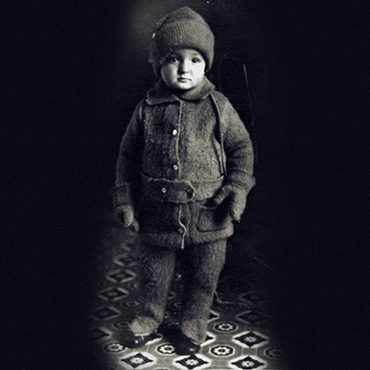 Frank Perdue started helping out as soon as he was old enough to hold an egg in two hands.

Arthur Perdue founded his poultry company in 1920, the same year his wife, Pearl, gave birth to their son, Franklin Parsons Perdue. As soon as he could hold an egg in his hands, Frank started helping with the family business.

In 1925, the Perdues started selling baby chicks to other farmers instead of selling table eggs. By investing in the best available breeding stock, Arthur soon gained a reputation for producing quality chicks. Even when the stock market crashed, Perdue’s business stayed strong through hard work, frugality and a commitment to quality. 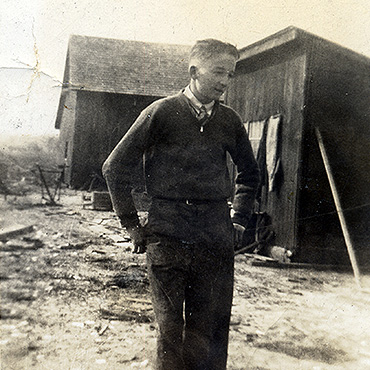 Frank grew up on the farm—and in the family business.

The Perdues’ poultry business continued to grow as local farmers trusted Arthur as a man of integrity.

In 1939, Frank left behind an unpromising collegiate baseball career to join his father’s business as only the second paid associate. 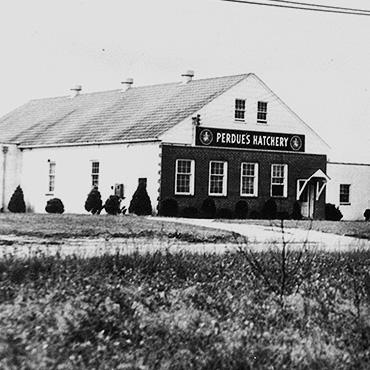 The switch to meat-type birds set the stage for future growth.

A poultry disease sweeping through the region destroyed most of the company’s flocks and threatened the family business. In response, Arthur Perdue sold layer chicks instead of meat bird chicks, aligning with the emerging broiler industry and setting the stage for further growth. 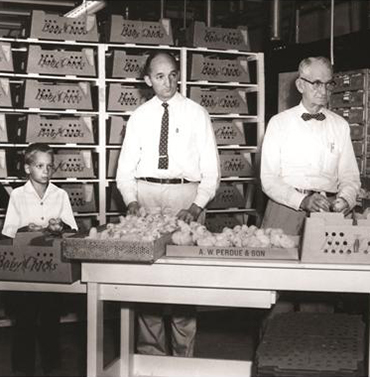 Frank designed the company’s first logo, a chick under a magnifying glass.

Frank took over leadership of the business, which became incorporated as A.W. Perdue & Son. The Perdues began supplying chickens for processing by partnering with local farmers to raise birds, which they sold at live auctions. 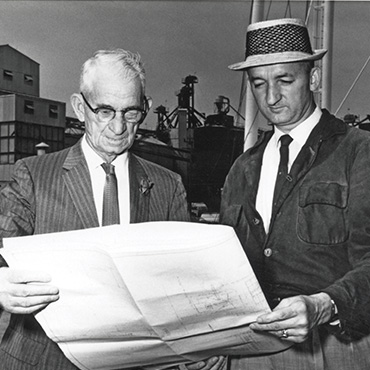 Frank and Arthur look over plans for the company’s first soybean processing plant.

The company gained traction in the grain and oilseed business as Frank recognized the increasing importance of feed ingredients, investing in grain receiving and soybean processing. Frank understood that processing chicken would be part of the future, and Perdue opened its first processing plant in 1968.

Rather than following the lead of others, Frank marketed a measurably superior product and put his family name on it. He advertised in the competitive New York City broiler market to introduce the PERDUE® brand, forever changing the poultry industry—and making marketing history. 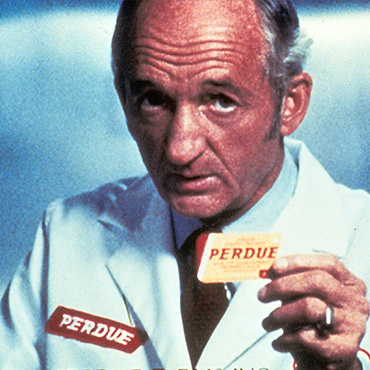 The company’s first TV commercial aired in the early ’70s and introduced Frank Perdue, the first company leader to successfully serve as an advertising spokesman in a major branding campaign. The company’s now-famous slogan, “It takes a tough man to make a tender chicken®,” helped make PERDUE® a household name.

Frank’s quest to sell a better PERDUE® chicken led to the introduction of the PERDUE® OVEN STUFFER® Roaster in 1974. Perdue became the only company with its own proprietary breed, which had measurably more breast meat than other commercial breeds. 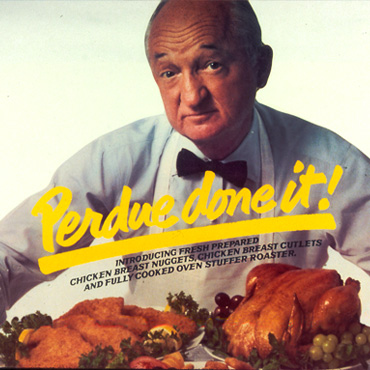 Perdue added turkey to its poultry portfolio, introduced its first fully cooked products with the PERDUE® DONE IT® line and branched out into foodservice.

Frank’s son, Jim, who had grown up spending summers with the company, returned as a management trainee and worked his way up the ranks, learning all parts of the business along the way. 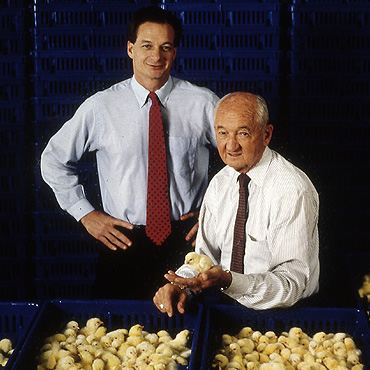 Frank turned over the reins of the company to his son in 1991, making Jim the third generation Perdue to lead the company.

Jim Perdue was named chairman in 1991, becoming a third-generation company leader, and took over the role of advertising spokesman in 1994. 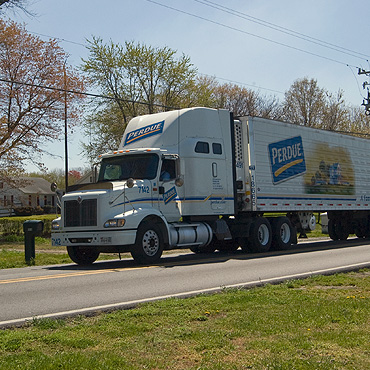 A refreshed logo includes the Perdue family farmhouse, where the company started.

In 2005, the company said farewell to Frank Perdue, honoring his legacy by recommitting to quality, service and reliability. To mark the company’s 85th anniversary, a new logo featuring the original Perdue family farmhouse celebrated “a family commitment to quality since 1920.®” 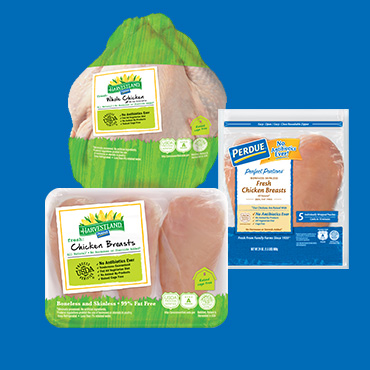 Perdue AgriBusiness established itself as a global player by becoming an independent company and continuing to grow outside sales, including exports. 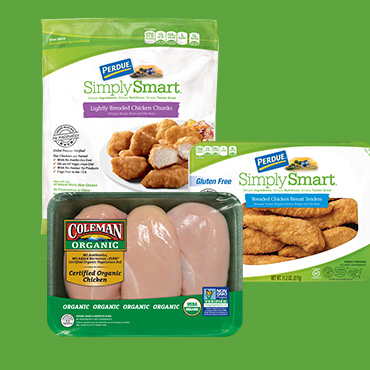 Perdue purchased Coleman Natural Foods and became the leading producer of organic chicken and no-antibiotics-ever chicken, turkey and pork. The new PERDUE® SIMPLY SMART® line offered reduced sodium and fat levels and simple ingredients. Perdue Foods set a new standard for responsible use of antibiotics, reducing the use of human antibiotics by 95% across the company. 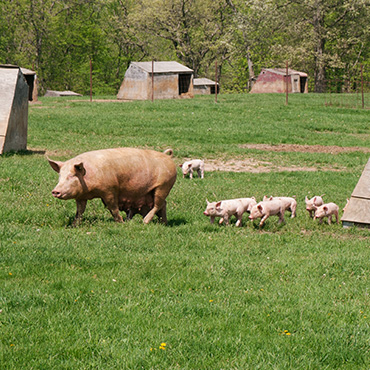 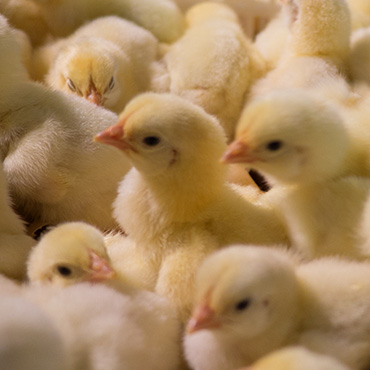 Perdue moved completely away from antibiotics, becoming the first major poultry company to stop the routine use of human antibiotics and all use of animal antibiotics. On average, 95% of Perdue’s chickens and two-thirds of its turkeys are raised without ever receiving an antibiotic.

Perdue took another major step in protecting the Chesapeake Bay, expanding a $60 million investment in nutrient recycling on Delmarva with the addition of a $12.5 million capital investment in a composting operation at Perdue AgriRecycle. Perdue AgriRecycle, which celebrated its 15th anniversary, already handled more than two billion pounds of poultry. 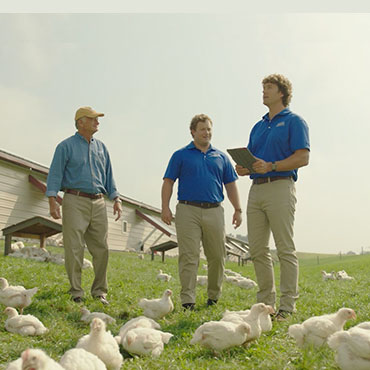 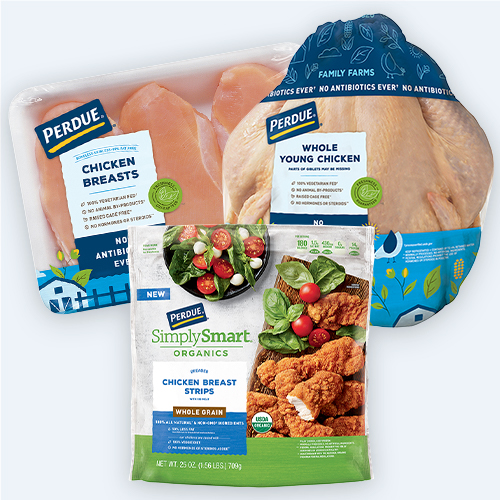 In 2018, we marked the 50th anniversary of the PERDUE® brand and brought the party home with a celebration at our Salisbury, Md., plant where it all started.

We announced goals for significant reductions in greenhouse gases, water use and solid waste.

We debuted in the international Business Benchmark on Farm Animal Welfare among the top 15% of more than 100 global food companies, while moving all our Coleman Natural pork production to crate-free. 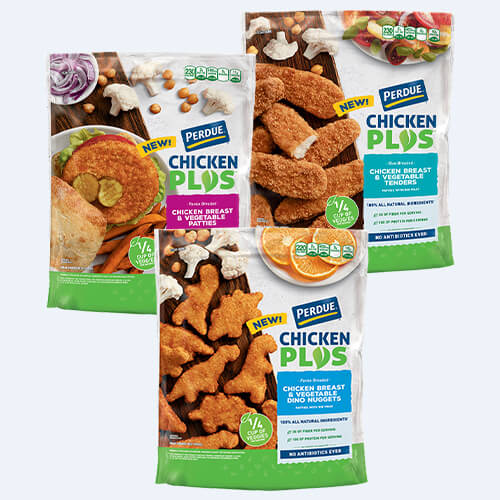 Forbes named Perdue Farms one of the “Best Employers for Diversity."

In 2020, our company will turn 100 years old. As we look forward to celebrating our Centennial – and to the start of our second century – we invite you to explore the history of our family-owned company. 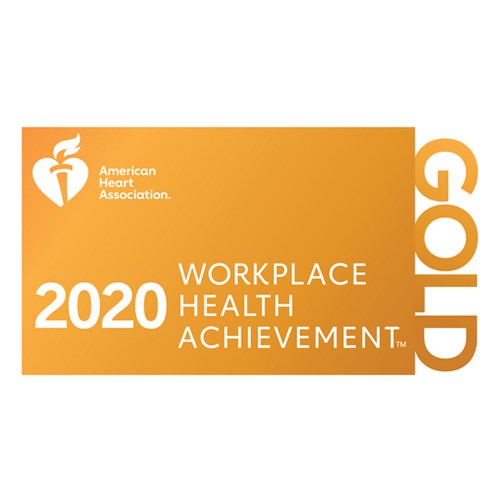 Moving into our Next Century

As we look forward to our second century, our path forward is about getting better, not just bigger. We’ll continue on our ongoing journey to become “the most-trusted name in food and agricultural products.”

Take a walk through our family legacy and the Perdue story with a virtual tour.
Stay awhile and get-to-know us better – or feel free to come back to learn more.

For the best tour experience, click on the flashing arrows on the bottom left to start your experience. These arrows are placed throughout the room to help move you along the storyline. Click on any of the highlighted panels to get started and to get a closer look at that area.